This was a wild dystopian speculative fiction story that asks some important questions and is quite touching at times. The land has been laid to waste by drought, conflict, and loosed biotech from the now-defunct Company. Rachel and Wick team up to take a stab at survival in this newly arranged city, and a real sense of tension is conveyed. Wick tries to maintain a hold on their territory through the dealing of information as well as his own psychoactive biotech, while Rachel scavenges for salvage off of which they can live. It’s during one of her outings that she finds something rather extraordinary.

This book left me bit confused as to the details of some of the science fiction elements. The who, what and why of the Company was never made clear, nor were specifics of some of the biotech it turned out. I think this was mostly a conscious choice by the author, but it did leave me a bit unsatisfied. Near the end I realized that the character of Mord had once been human, and it seemed like that fact had been revealed much earlier but I had somehow managed to either miss it or else forget it completely. The fact that the giant and vicious flying bear used to be human, and a former coworker of Wick’s at that, seems like a point that should be too significant to be missed/forgotten.

The story does many things right, though, and the best part by far was Borne himself – sweet and innocent and endlessly amusing.

“Those are three dead skeletons on the wall, Borne.”

“Yes, Rachel. I took them from the crossroads. I thought they would look nice in here.”

And yes, I maintain a belief in Borne’s inherent innocence. (And as it says in the book’s blurb, “in a world so broken that innocence is a precious thing.”) Borne simply does what he was designed to do, but because Rachel raises him with a human’s sensibilities, he feels great guilt and shame about his own nature. Which gives me all the feels!

“We all just want to be people, and none of us knows what that really means.”

And I sincerely hope to be able to subscribe to a book box someday(when I’m not so broke), because it turns out Quarterly’s most recent fiction Literary Box was curated by Vandermeer and included some of his own drawings of just what Borne looks like in some of his many forms. How fun is that?! 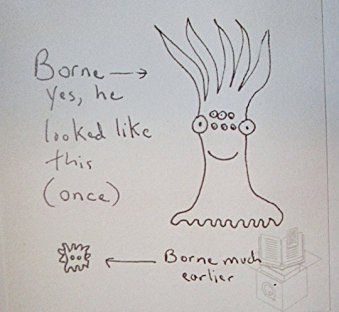 If you like science fiction of the speculative and dystopian variety, amusing plant/animal/salvage/biotech thingies, and The Feels, then give this one a read!