The magical adventure begun in The Bear and the Nightingale continues as brave Vasya, now a young woman, is forced to choose between marriage or life in a convent and instead flees her home—but soon finds herself called upon to help defend the city of Moscow when it comes under siege.

Orphaned and cast out as a witch by her village, Vasya’s options are few: resign herself to life in a convent, or allow her older sister to make her a match with a Moscovite prince. Both doom her to life in a tower, cut off from the vast world she longs to explore. So instead she chooses adventure, disguising herself as a boy and riding her horse into the woods. When a battle with some bandits who have been terrorizing the countryside earns her the admiration of the Grand Prince of Moscow, she must carefully guard the secret of her gender to remain in his good graces—even as she realizes his kingdom is under threat from mysterious forces only she will be able to stop.

When I read the first book in the Winternight trilogy, I found it to be a good dark fantasy story based on fun and interesting bits of Russian folklore. It was exciting, it was spooky at times. Vasya was a great heroine who was easy to root for.

Book 2, in comparison, was a bit of a letdown for me.

The setting and atmosphere in this book were just as great as they were in its predecessor. The members of Russian folklore continue to make enchanting appearances across the snowy landscape and politics of a medieval Russian winter. We have spirits both helpful and mischievous, mystical horses, warnings imparted by vengeful ghosts, and a sorcerer who has found a way to cheat Death. 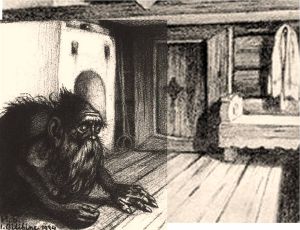 On the other hand, the biggest disappointment here was the character of Vasya. Her development in this installment is more of a regression. She tries to experience a freedom not readily available to women in her time, but winds up almost dying several times in the attempt, and being saved time and again by the male potential love interest. Why can she not save herself just once, after being such a strong character with a great sense of agency in book 1?

Speaking of love, I found the romance aspects in this story lukewarm at best. An unconventional, clever country girl labeled a witch and a frost-demon? I could ship that so hard! But their encounters here are rather lacking in any sort of exciting tension. As this is Young Adult historical fiction I certainly wasn’t expecting smut, but the romance is missing much of a spark at all.

There was still enough for me to enjoy in this book that I plan on reading the next in the trilogy, but I will keep my fingers crossed that Vasya’s character arc improves, and the romance heats up (I’m hoping that’s not too much to ask of the winter king!)