I just recently joined Net Galley, and Veiled Intentions by Eileen Carr is the first title I received and read in exchange for an honest review. 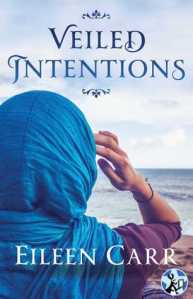 When a young Muslim high school student is accused of a crime she didn’t commit, her school counselor gets involved to clear her record in this ripped-from-the-headlines romantic thriller from the author of Vanished in the Night.

When Lily Simon finds cops in the lobby of the high school where she’s a guidance counselor, she’s not surprised: cops and adolescents go together like sex, drugs, and rock ‘n’ roll. But when the cops take Jamila, a Muslim student, into custody for a crime she didn’t commit, Lily’s high school becomes a powder keg.

Police think Jamila is responsible for a hit and run, and since she’s not talking, they have no choice but to keep her as the main suspect. And since the victim—a young soldier recently returned from Afghanistan—is lying unconscious in the hospital, the whole town is taking sides on whether or not Jamila’s arrest is religious persecution. Determined to find the truth, Lily teams up with a reporter to uncover what really happened the night of the hit and run. But Lily didn’t expect to find such a tangled web…

A high-achieving Muslim  student gets accused of a hit-and-run accident involving a veteran of the war in Afghanistan. Jamila is stunned, and heartbroken, to see how quick all the people she has grown up with and known her entire life are to suddenly label her as “Other”, even though she denies any involvement in the accident. She, along with other Muslim families in the community, become targets for bullying and hate crimes. They are alienated in their own hometown. Jamila is no longer a seventeen year old high school student active in community projects who also practices Islam; now the view of her is limited to simply her religion. In her distress, she turns more toward the only aspect of herself that society will allow her to be defined by.

Veiled Intentions looks not only at Jamila and how she feels about and reacts to everything that ensues, but also all of the other various members of the community. We see all the different viewpoints involved in such a situation-the good, the bad, and the ugly. This is not a “feel good” book. However, it takes a necessary look at issues that are prevalent in the world today. It does an admirable job of surveying all of the different thoughts and opinions found in society today about issues of religious or cultural differences and how they should be ‘dealt with’. It does so through simple and straightforward writing.

In addition to representing all of the views that crop up about such matters in a smart fashion, this book drives home the lesson Dr. King was attempting to teach decades ago: Hate cannot drive out hate. Only love can do that. This is a call for the world to find a way to stop the cycle of discrimination and violence.

Veiled Intentions has an expected publication date of Dec 29th